It’s all in the Dollar

The Australian share market (red line) has experienced 3 significant bouts of weakness over the past two years, while in an overall upward trend. All have been the result of currency weakness or more correctly, US dollar strength (blue line is the AUD/USD exchange rate).

Like the other two dips in May/June 2013 and December/January 2014 we expect this to be relatively short lived and a good buying opportunity. 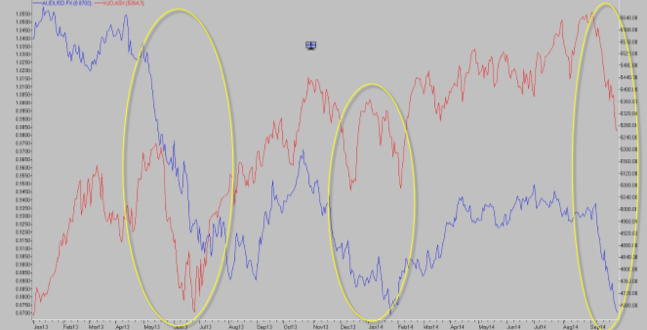 US Tapering (cessation of the Federal Reserves bond buying (money printing) operation and an eventual return to a “normal’ interest rate setting).

As we have spoken of many times over the past few years, the US Federal Reserve (and also now the Bank of Japan and European Central Bank) has engaged in unconventional monetary policy designed to inject cash into the global economy, accelerating economic growth. This ‘cheap money’ has found it’s way into assets all over the world, particularly high yielding assets (shares and bonds) in countries like Australia. This flow of funds, often referred to as the ‘Carry Trade’ kept the Australian dollar higher for longer than most anticipated.

Each of the above 3 bouts of weakness in the Australian Dollar relative to the US Dollar has coincided with a change in the US Quantative Easing (QE) policy. The first was when the Federal Reserve first spoke of starting to taper their bond buying program, the second when they actually started and the third as it comes to a close.

The US economy is now growing strongly (Q2 growth of 4.2% released last week) and the Federal Reserve is about to stop printing money. The conversation is now centred around when interest rates will start to rise.

Each of these steps has seen renewed strength in the US dollar and an unwind of the carry trade (overseas investors selling Australian assets and repatriating the money back to the US). Once the overseas selling stops, which will coincide with a stabilisation of the AUD, then we will see domestic fund managers start buying our oversold market. Like the last two dips, this could happen quite quickly.

The economy is in transition but is growing and growth next year is likely to be better than this year. Thirdly, the Australian share market is now trading slightly below its average valuation of the past 5 years.

Within the Core Australian Share portfolio we have moved from having a cash weighting of almost 15%, to now being fully invested. We have also introduced a number of companies with substantial US earnings such as Amcor, Ansell and CSL in anticipation of this currency decline.

This article was originally written by FYM Financial and has been posted on this site with their permission.

This report provides general information only and does not take into account the investment objectives, financial circumstances or needs of any person. To the maximum extent permitted by law, FYM Financial Pty Ltd, its director and employees accept no liability for any loss or damage incurred as a result of any action taken or not taken on the basis of the information contained in the report or any omissions or errors within it. Before making an investment decision you should consider the latest Product Disclosure Statement or Financial Services Guide and assess whether the product and/or services is appropriate for you. It is advisable that you obtain professional independent financial, legal and taxation advice before making any financial investment decision. FYM Financial does not guarantee the repayment of capital, the payment of income, or the performance of its investments.

PrevPreviousWhat can a Financial Planner help me with?
NextWatershed quarterly report for October 2014Next